In spite of the widespread occurrence of aerosols in nature and their day to day creation in many phases of human activity, it is only in comparatively recent times that a scientific study has been made of their properties and behaviour. During the late 19th and early 20th century many scientists working in various fields became interested in problems which would now be considered aerosol related. The results were quite often either by products of basic research, related to other fields or just plain observations which roused curiosity. Several of the great classical physicists and mathematicians were attracted by the peculiar properties of particulate clouds and they undertook research on various aspects, which have since become associated with their names e.g. Stokes, Aitken, Rayleigh.

In the mid twentieth century much of the fundamental research on aerosol science was undertaken at Porton Down and later, this expanded to include AERE Harwell, the Health and Safety Laboratories, Institute of Occupational Medicine and Rothamsted.  In 1975 CN Davies (one of the founding fathers of aerosol science) undertook a review aerosol science research to which the Science Research Council ‘that aerosol science was a subject of growing importance and one which had been neglected in the UK’ and there was ‘ a serious shortcoming in the very small amount of fundamental work on aerosols in the UK, despite their great industrial and environmental importance’.

By the mid 1980’s it was realized that the only forum open for discussing matters encompassing the whole of aerosol science was the annual conference of GAeF and the AAAR. Since these conferences were held overseas the number who could attend from the UK was restricted, mainly due to economic considerations. It was therefore decided to form an aerosol society to serve the UK and the Republic of Ireland. A Standing Committee, composed of Mrs P.K.P. Burnell, Mr A. Cussens, Mr W.D. Griffiths, Dr J.P. Mitchell, Dr J.N. Pritchard and Dr N.P. Vaughan, was formed in 1985. They planned the inaugural meeting, which was held on 15th July 1986 at the Royal Free Hospital and attended by 136 people. The morning session was reserved for the transaction of Society business and in the afternoon lectures were given by C.N. Davies, J.W. Gentry and J. Vincent. Griffiths was elected Chairman of the Society and, in addition to the those on the Standing Committee, Dr R.M. Harrison, Dr I. Livsey and Dr J.I.T. Stenhouse were elected to the committee. Since the inaugural meeting many successful one-day meetings and longer annual conferences have since been organized. The first was entitled ‘Aerosols in Veterinary Science’ and held on 5th December 1986. The first Annual Conference was held on 31st March – 1st April at Loughborough. Annual Conference proceedings are published under the title ‘Aerosols: Their Generation, Behaviour and Applications’. Out of these one-day meetings has developed a highly successful series of ‘Drug Delivery to the Lungs’ meetings which now attracts over 600 attendees. Today DDL is recognized as one of the major European conferences in respiratory drug delivery and a key international meeting for the rest of the world. In 1992 the Society hosted the European Aerosol Conference in Oxford, in 1998, the 5th International Aerosol Conference which was held in Edinburgh, the European Aerosol Conference in Dublin (2000) and Manchester (2011). We are delighted that the Society has been chosen to host the 2021 European Aerosol Conference. Event details will be published in due course.

For many years now the Society has run a “Fundamentals of Aerosol Science” course which provides an opportunity for both new and existing researchers to explore and understand aerosol science and improve or refresh their knowledge of some of the fundamental concepts.  The Society also encourages graduates to undertake postgraduate training in the field of aerosol science via the Aerosol Society Doctoral Student Award.

The Aerosol Society continues to go from strength to strength and is ever conscious of its membership and ways in which it can support the study and science of aerosols.

More details of the history of aerosol science in the UK can be found in: Preining, Othmar and E. James Davis (eds.), History of Aerosol Science, Österreichische Akademie der Wissenschaften,  (2000) 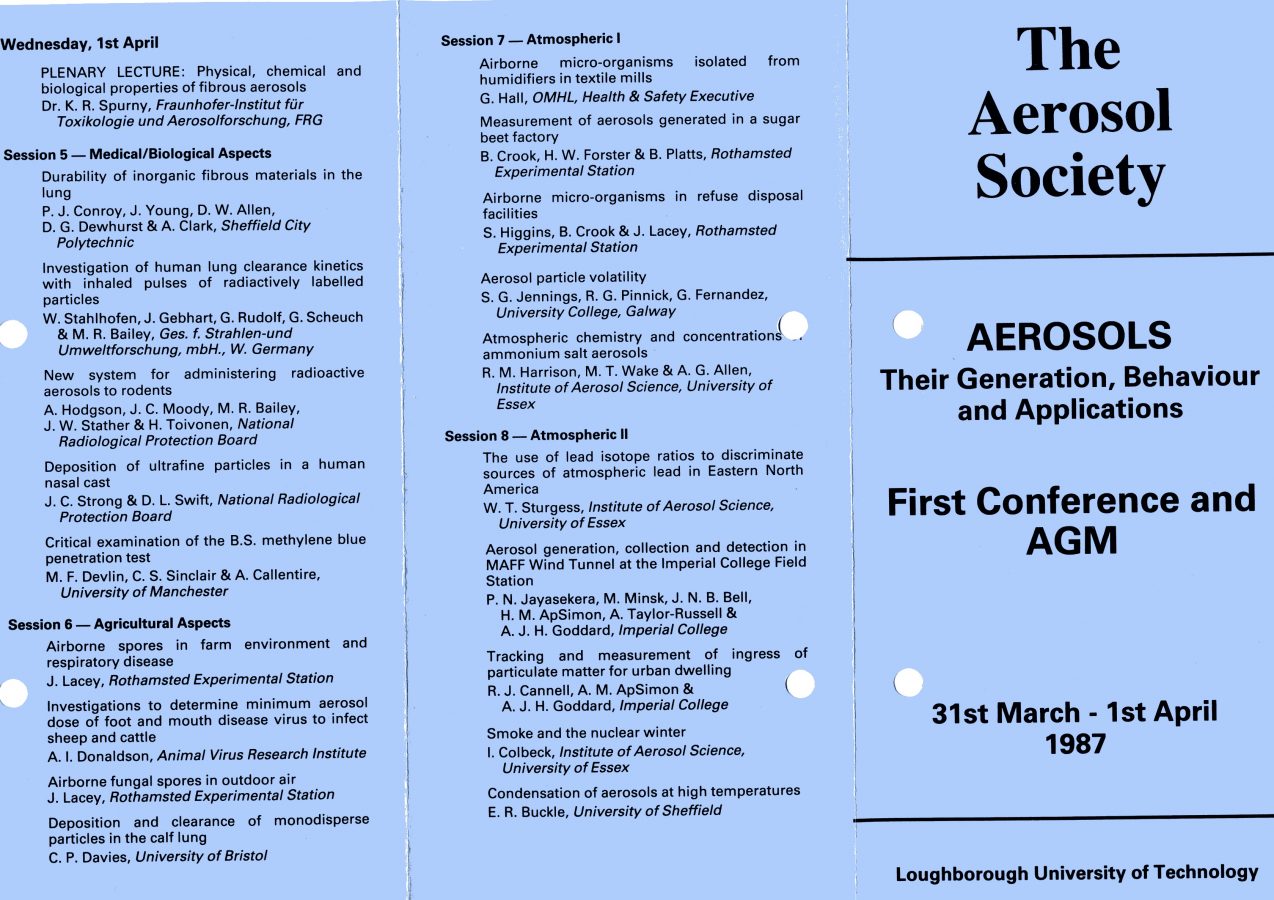 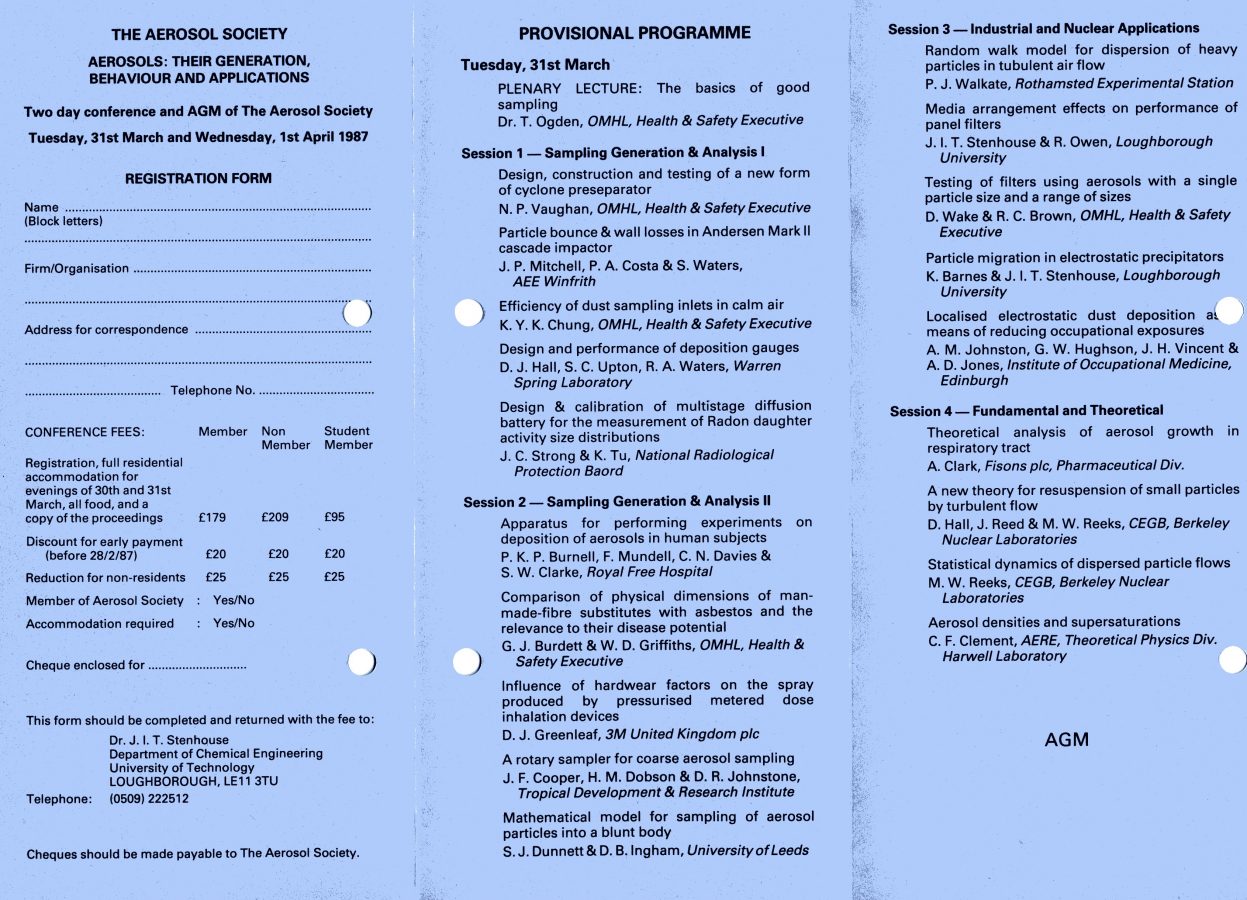 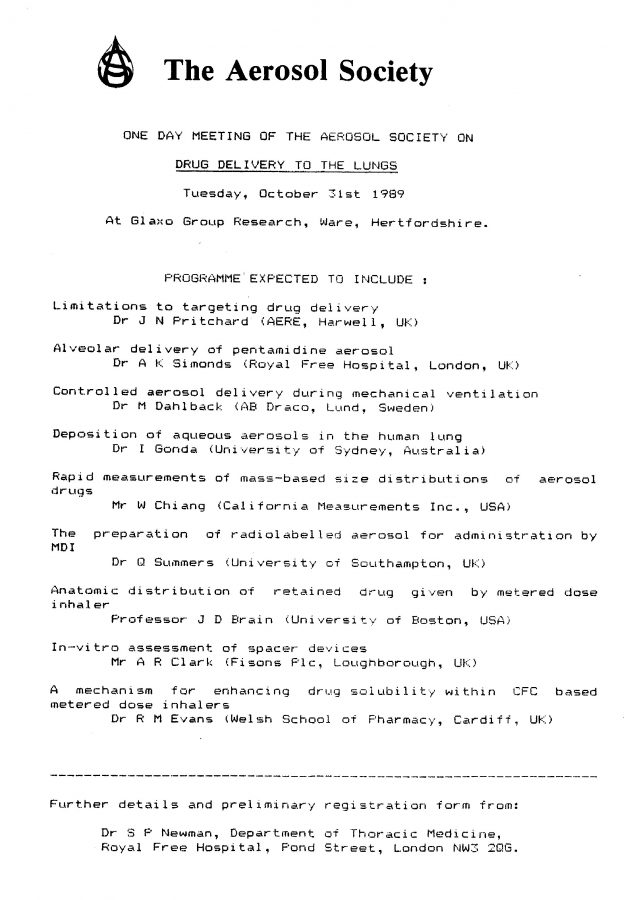 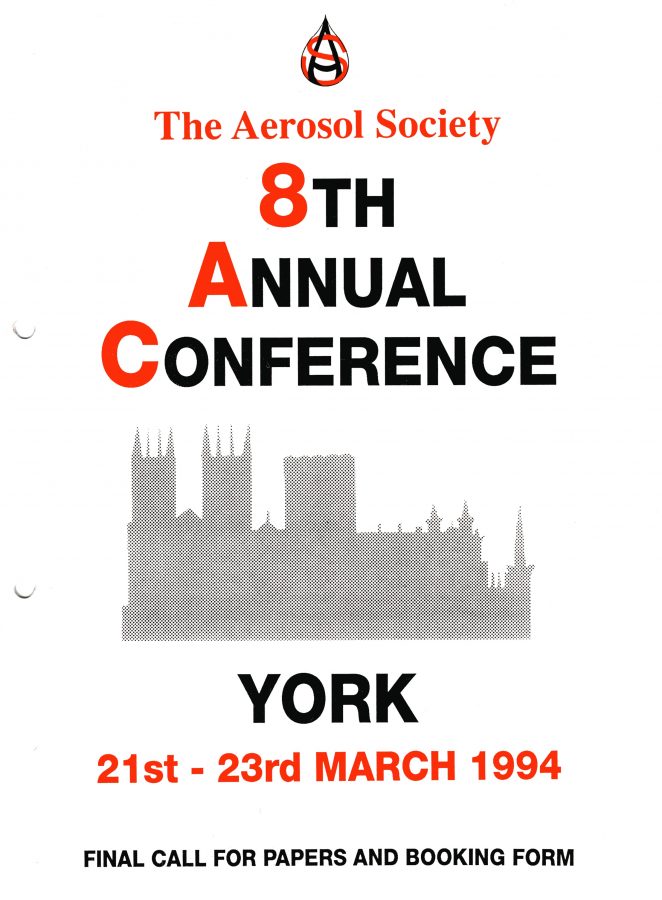 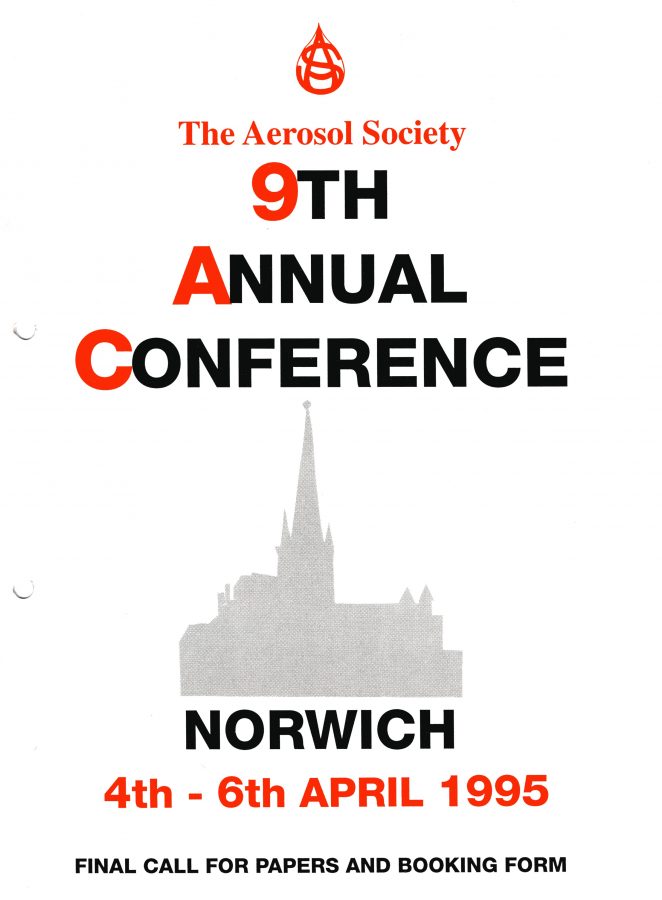 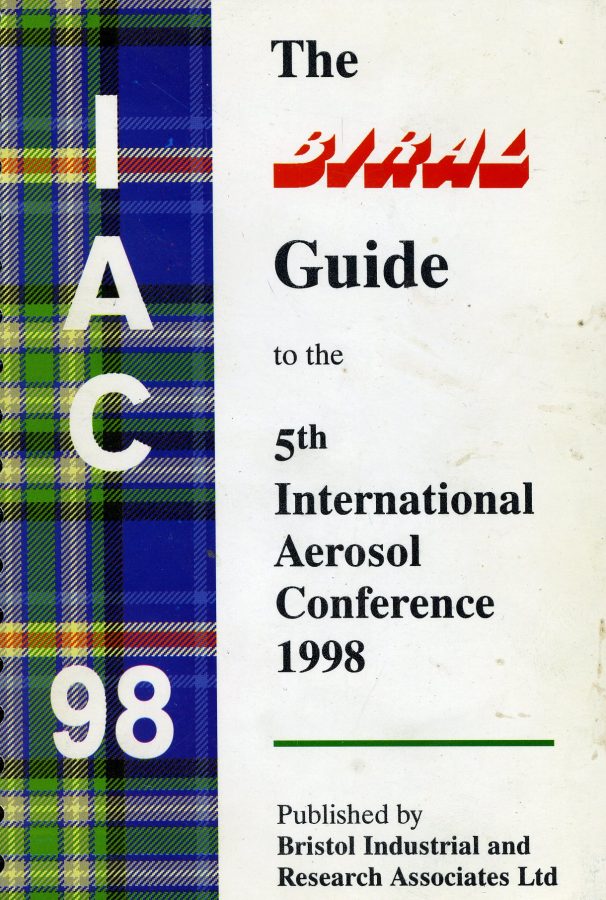 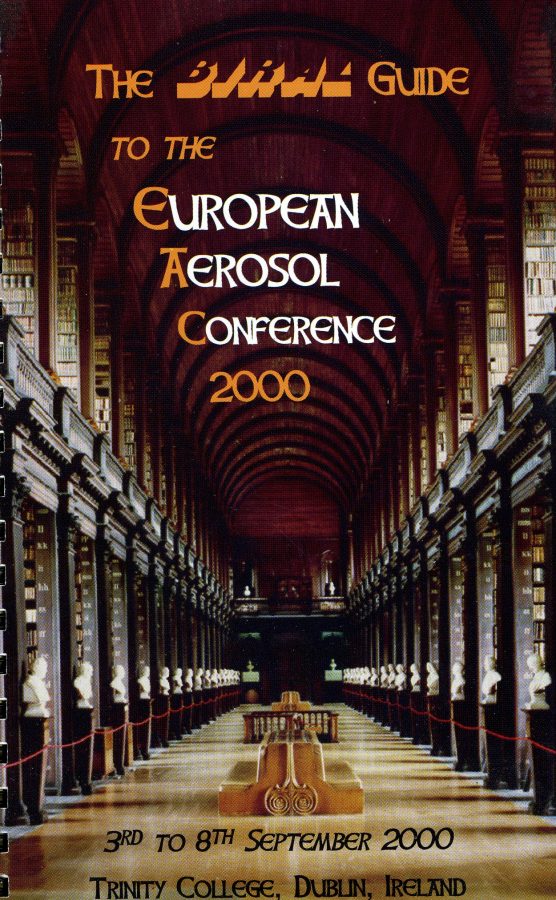 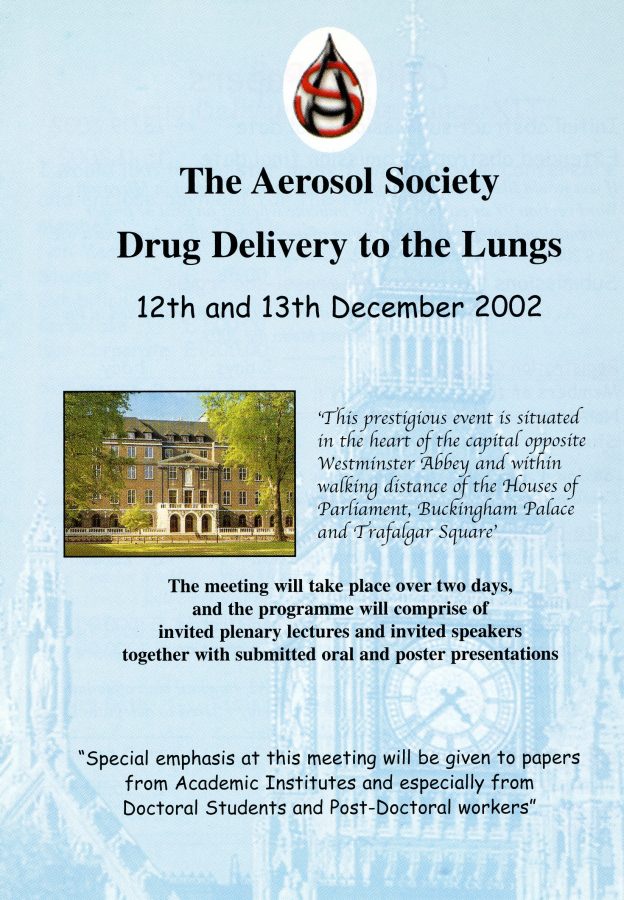 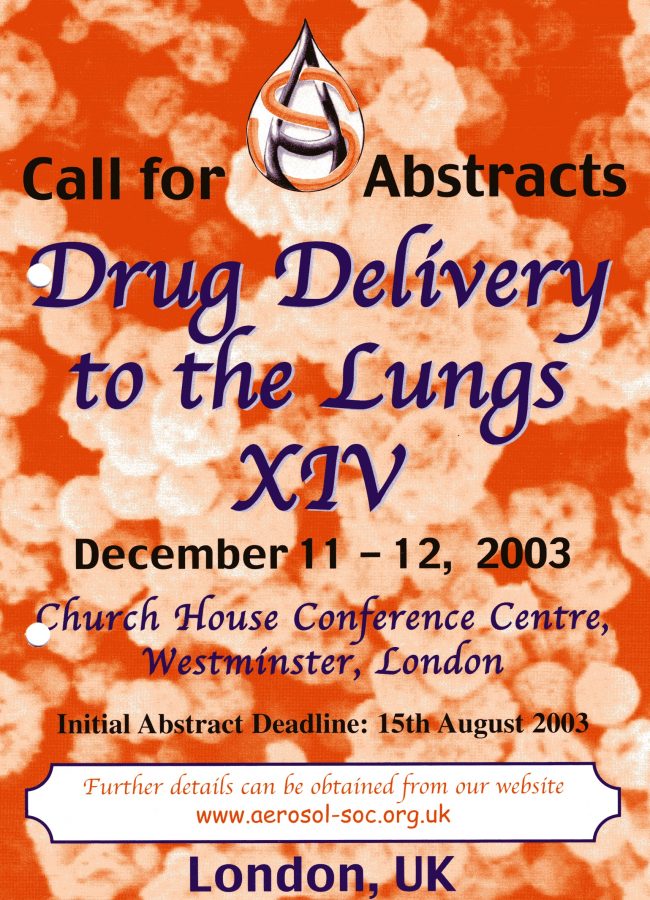 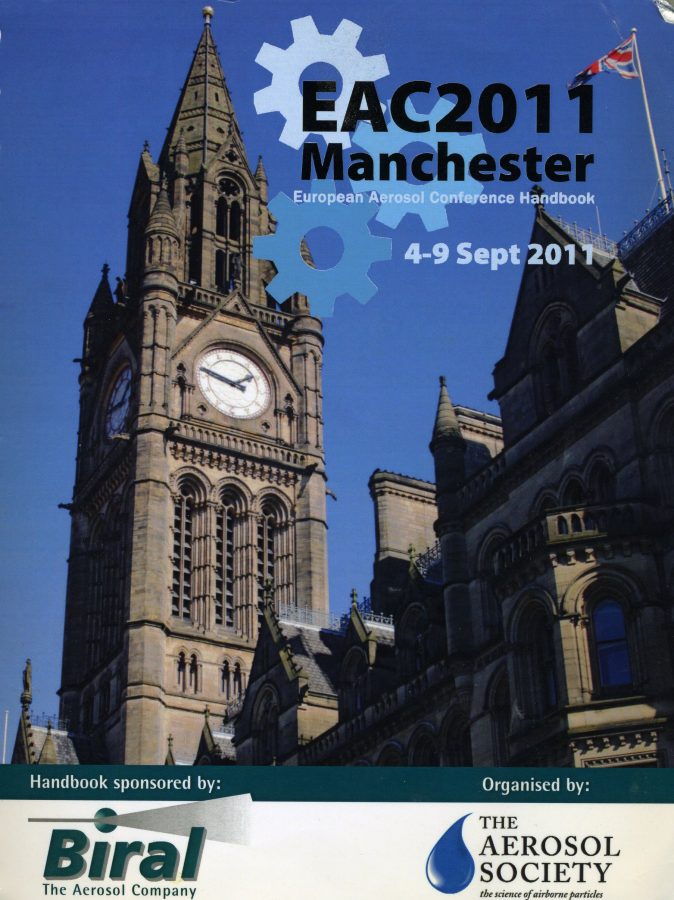