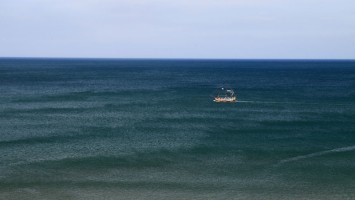 The oxygen minimum zone (OMZ) below the surface of the equatorial Pacific Ocean, where oxygen concentration is depleted, is increasing in extent and magnitude.

A recent study has suggested that aerosols containing ‘bio-available’ soluble iron from anthropogenic pollution sources may be driving the enhancement of the OMZ. Increased biological productivity, through the increased availability of iron, was thought to be the main reason for oxygen depletion due to subsurface respiration from decomposition of sinking organic material. Fixed nitrogen fluxes (from anthropogenic sources), which can also result in increased biological activity, increased during this period as well; however, this had much less impact than iron availability. Although aerosol-borne iron (and fixed nitrogen) deposition was enhanced mostly in mid-latitudes, oxygen concentration was suppressed most significantly in the tropics, implying transport of the pollutants to the tropical upwelling regions. Decreased oxygen concentration in OMZs may also contribute to denitrification, reducing bioavailable nitrogen and increasing emissions of the greenhouse gas nitrous oxide.