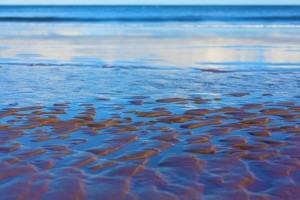 The Spring 2014 pollution event which caused alarm over large parts of the UK, with photographs of red dust deposits in SE England commonly shown in the press, may have been only in part due to the ‘Sahara dust’ widely attributed as the cause at the time, according to a recent study.

The authors used the EMEP4UK atmospheric chemistry transport model, along with hourly data on PM2.5, PM10 and inorganic components (sulphate, nitrate and ammonium) from the UK Automatic Urban and Rural Network (AURN) and UK Eutrophying and Acidifying Atmospheric Pollution (UKEAP) network to assess the impact of various sources on the pollution event. They conclude that Sahara dust was probably only present at ground level for a short period towards the end of the 10-day event and mostly confined to Southern England, contributing under 20% to total PM2.5 and PM10 for most of the UK. The largest contributor was ammonium nitrate, associated with agricultural fertiliser use, in this case mostly from non-UK sources.

However, the authors were concerned that the chance to address anthropogenic impact on particulate pollution was lost because the emphasis was placed on a ‘natural’ phenomenon by the UK media and politicians.