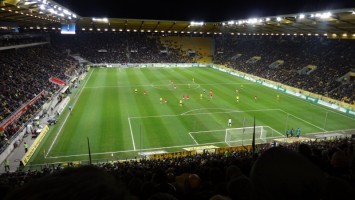 A study of 1,771 professional footballers at 29 clubs in the German Bundesliga, covering almost 3,000 matches between 1999 and 2011, has suggested that player performance may be impaired by particulate air pollution.

The number of passes made by each player was used as the performance indicator, and for each 1% increase in PM concentration, as measured at kick-off time by nearby monitoring stations in close proximity to the stadium, this indicator dropped by 0.2%. The average PM concentration throughout all matches in the study was 23.8 µg m-3, with the EU limit value of 50 µg m-3 exceeded in 7% of matches. Defenders and midfielders, who typically make more passes per game, had a greater performance impairment than forwards, while older players (aged over 30) were more affected than younger players by high PM levels. The average length of passes also increased with increasing pollution, suggesting players may (subconsciously) be altering their playing style to compensate for reduced performance.

The study authors suggest that, while their work applies to a very specific and unusual population subset, the results could provide insights into other performance in other outdoor occupations and for recreational exercise.