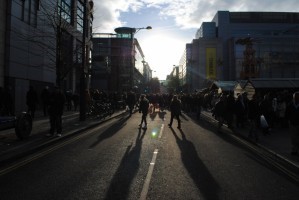 If you have been in Manchester city centre recently, you may have noticed a group of performance artists walking the streets in ‘futuristic’ capes and masks, which change colour in real time as a response to concentrations of PM2.5 to which the wearers are exposed. The ‘human sensor’ project is led by the media artist Kasia Molga as part of Manchester European City of Science 2016, with the technology behind the capes developed in collaboration with atmospheric scientists at King’s College.

A small particulate sensor and GPS watch, linked with a wearable Raspberry Pi computer, control the output of a series of LEDs embedded in the capes. Visualising air pollution through projects like this is seen as an important bridge between the science of air pollution and the everyday experiences of the public, in communicating the hazards associated with a largely invisible health risk, and the reaction of passers-by to the performance was described by Molga as ‘amazing’.