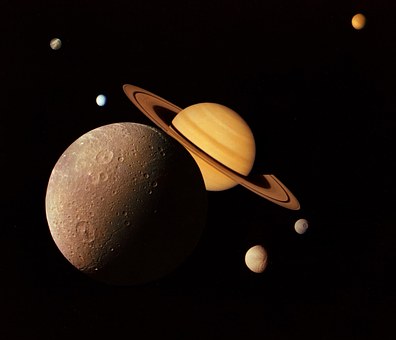 The atmosphere of Saturn’s moon Titan appears as a thick orange haze, as a result of large hydrocarbons and organic aerosols.

In the upper atmosphere, bombardment by extreme ultraviolet (EUV) radiation (wavelength 10-124 nm) and energetic particles produces large hydrocarbons via ion reactions. In the middle atmosphere (150-700 km altitude) these gaseous hydrocarbons are converted into particulates, but the exact details of this process are still subject to a deal of uncertainty.

A study by researchers at Chiba Institute of Technology, Japan, shows that far ultraviolet (FUV; 120-300 nm wavelength) irradiation, dominant in the middle atmosphere, may be required to produce the particle growth rates thought to contribute to observations on Titan from the Cassini-Huygens mission. Methane-CO2 mixtures were irradiated with FUV and the production, growth and composition of aerosols was measured and modelled, showing that particle production was vastly reduced for low methane-CO2 ratios. In addition, methane addition, a heterogeneous surface reaction, was more efficient than polymerisation in producing and growing particles.

The results also have implications for the atmosphere of the early Earth, which may have had thinner organic layers than previously predicted, and also on other solar system (e.g. Pluto) and extrasolar bodies with methane-rich atmospheres.