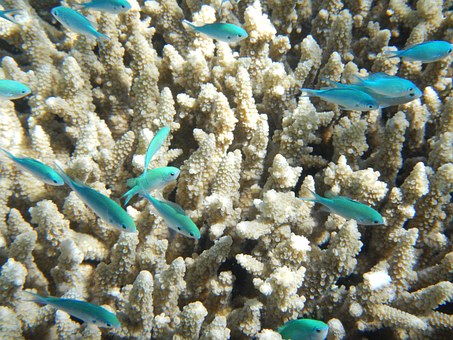 Aerosol precursor compounds emitted by corals during periods of high stress from sunlight at low tide may contribute to local aerosol nucleation, leading to cloud formation and brightening which may cool and protect the coral itself.

Researchers in Australia, studying an area of around 100 km2 in the Great Barrier Reef, observed correlations between satellite-derived aerosol optical depth (AOD) measurements and a metric for coral stress, which improved at low wind speeds.

The authors postulate that the enhanced emission of dimethylsulphoniopropionate (DMSP), a precursor to dimethylsulphide which can be oxidised to form sulphate aerosol in the atmosphere, and other compounds and aggregates by corals when stressed, may in part contribute to cooling the local area via new cloud formation and increased cloud lifetime and reflectivity. The effect is likely to have most impact at low wind speeds when precursor (and aerosol) concentrations are higher and the contribution of sea salt to AOD is reduced, but the prevailing wind direction over the Great Barrier Reef means that even if the corals producing the compounds are not themselves protected by new aerosol formation, corals downwind can be.

However, the contribution of other biogenic precursor compounds e.g. isoprene or monoterpenes to aerosol production was not assessed in this study, nor was the aerosol shielding sufficient to fully protect corals from bleaching.

Read the full report by Darren Quick at New Atlas.