A Bolt from the Brown: Why Pollution May Increase Lightning Strikes 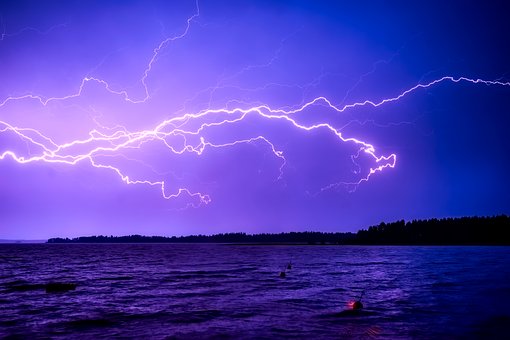 The influence of anthropogenic aerosol on lightning has been investigated by researchers at the University of Washington and NASA.

Analysis of lightning stroke data over 12 years from the World Wide Lightning Network, compared with modelled shipping emissions from the EDGAR model and measurements of aerosol optical depth (AOD), showed that the number of lightning strikes along busy shipping lanes in the Indian Ocean and South China Sea can be doubled compared to nearby regions with similar climate and prevailing meteorological conditions. Although a similar link between AOD has been observed on a regional scale due to Amazon forest fires and high levels of anthropogenic pollution in China, this study was able to detect an effect specifically due to shipping because of the naturally low background particulate levels over the ocean.

The authors hypothesise that aerosol (and aerosol precursor gas) emissions from exhausts, acting as cloud condensation nuclei, decrease the average particle size as the available water vapour is spread across a greater number of smaller particles. In turn, this means they are able to be carried higher into the atmosphere, freeze partially to form (mostly negatively-charged) ‘graupel’, and take part in the process of electric charge separation through collisions with (mostly positively-charged) ice crystals, leading to increased lightning frequency. At very high concentrations, however, cloud droplets become too small to enhance lightning significantly as their eventual collision rate with ice crystals is lower. Thermodynamic effects due to the heat of the exhaust plume may also increase convection, leading to a similar lightning enhancement. Progress in ascertaining the strength of each mechanism could be made by making further measurements of aerosol size distribution and properties near the base of clouds.

For the full report from Scientific American click here