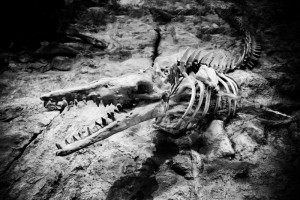 Although it is now widely thought that a large asteroid impact 66 million years ago caused the mass extinction of many species including dinosaurs and ammonites, the exact explanation is still being debated.

One proposed mechanism, involving the sudden injection of sulphate aerosol into the atmosphere, resulting in global cooling and increased rain acidification, may have resulted in species such as crocodiles, closely related to dinosaurs, being more dramatically affected than we observe. A recent study from Tohoku University suggests that, if the asteroid impact region was oil-rich, the resulting explosion and fires could have injected enough soot into the atmosphere to significantly cool the planet and reduce rainfall. Models suggested that soot could have remained airborne for 2 to 5 years, with climate taking up to 10 years before returning to normal.

Further, differences in the strength of the effect were seen at different latitudes, with equatorial cooling and drying much weaker, potentially providing a less harsh habitat allowing some species to survive. However, it is also known there was increased volcanic activity, with concurrent severe climate effects, around the time of the asteroid impact, and other researchers suggest that soot, whilst potentially important, is likely to be only one of several factors causing the extinction event.