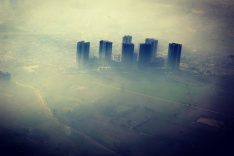 PM10 and PM2.5 levels in cities across the world between 2010 and 2016 collated by the World Health Organisation (WHO) Global Urban Ambient Air Quality Database, which compiles data from over 4,300 cities in 108 countries worldwide, have shown that ‘pollution inequality’ between richer and poorer nations is widening.

Whilst around 60% of North American and European cities showed decreased PM concentrations over this period, 70% of cities in South and South-East Asia showed higher levels in 2016 than in 2010. Delhi and Cairo topped the list for ‘most polluted’ megacities in terms of particulate matter, with annual mean concentrations of 292 and 284 µg m-3 respectively, almost 15 times the WHO recommended limit value of 20 µg m-3.

More than 90% of deaths thought to be attributable to air pollution occur in low- and middle-income countries. Some progress has been made in China, which has introduced stricter pollution controls in recent years, and other severely affected countries and cities are recognising the scale of the problem as more data is gathered, especially in regions such as Africa where measurement points are scarce. Nevertheless, both WHO and commentators highlight the need for continued action to reduce air pollution.

Read the full article in The Guardian online.