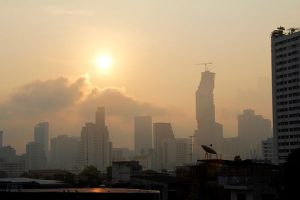 Several attempts to reduce high levels of particulate air pollution in Bangkok, Thailand, by cloud seeding to induce rainfall which would wash out aerosols from the atmosphere, have failed to lower PM2.5 levels in the city.

High pressure, continental cool air from the north had contributed to raising ‘real-time’ concentrations of PM2.5 to as high as 156 µg m‑3 at one monitoring station, which forced the Pollution Control Department to issue warnings for vulnerable populations to stay indoors.

The particular methodology employed in Thailand was developed under the initiative of the late King Bhumibol to alleviate drought in the South-East Asian country, first employed in 1969, and has since been patented. The Thai government authorised the Department of Royal Rainmaking and Agricultural Aviation to begin cloud seeding operations in February in response to the high pollution levels, but in low relative humidities (30-40% at ground level) no appreciable effect on clouds or rainfall was induced.

Last year in India, helicopters spraying water were also employed to attempt to bring down particulate pollution levels – however, in this case, smog levels in Delhi became so high that the visibility was too low for the aircraft to take off.